Resources
Join Us
Home
About Us 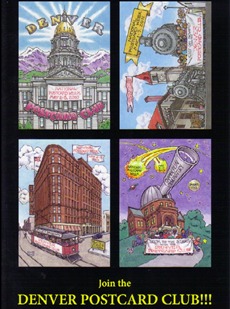 The Denver Postcard Club issued its first National Postcard Week postcard in honor of Bernie Lackey (1917-1992). Bernie was considered by early club members to be the founder and driving force in establishing our club in 1979. Kathy Rogers, a club member and artist, designed this limited edition tribute to Bernie in 1993.

In 2009, club president Jeff Tyler spearheaded the club's tradition of designing a special postcard for National Postcard Week. Club members selected graphic artist Rick Geary to design the first card using a vintage card for inspiration. On this page are images of the National Postcard Week postcards we have issued to date. 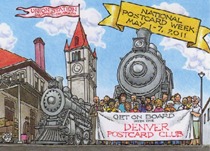 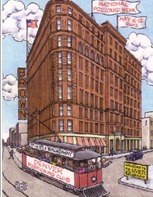 Our Club and many postcard clubs across the United States traditionally honor National Postcard Week during the first full week in May by designing a special postcard and celebrating the role of postcards in our culture and history.